I have been hillwalking and running for over 40 years and currently run Ultra Marathons and train a lot in the hills, often alone, combining my love of hill walking and running. I also marshal at races and have taken in part in a number of events, including multi-day, weekend and single day events. I have performed a variety of roles often in high remote terrain and working solo. It has to be said that I am rubbing shoulders with some very experienced and skilled outdoor professionals, which is adding to my skillset.

Having gained this experience, I am well aware of the dangers inherent in the outdoors and how to minimise this. I am fully supportive of Race Directors when they impose Mandatory Kit but am being increasingly frustrated when I see negative comments about Mandatory Kit on online forums and other places. I have read many comments complaining about having to have such things as waterproof body cover, spare warm top and Bivy Bag/foil blanket. Some people seem to spend more time trying to circumvent the Mandatory Kit, than considering that it may potentially help them. Mandatory Kit is of course the race version of what we carry ourselves when out on the hills and will vary from person to person but hopefully see us through any difficult times.

At Skyline Scotland in 2018 it became apparent during the Vertical Kilometer Race (VK), to the top of a Munro from sea level, that competitors were arriving at the summit and the race finish, already hypothermic and without the skills or safety kit and clothing to allow them to adjust and return safely. A large number of people had to be treated for hypothermia as mentioned in the Race Directors report and MRT had to be called for one participant. Fortunately, there were no serious escalations but there could have been.

In September 2018 I marshalled at an event and at a static CP made some observations and came to some conclusions which seem to me to be pertinent, if not exactly new or rocket science.

The CP was near the summit of a hill near Perth at a height of about 180m and with approximately 5 miles distance remaining to the finish of both the 30 mile and 50 mile Ultras. The location was heavily wooded and thus slightly sheltered but it was very windy with some wind getting through. It was initially sunny but still fresh and later got cold although it stayed dry. I was in position for about 5 ½ hours from 1415 to 1945 hours and darkness fell around 1900. It was not particularly cold, maybe just less than 10 degrees C and dropping but never near freezing.

I was warm from running uphill on arrival and allowed the sweat to dry away while I got my CP organised and then took up my duties. As time wore on I put on most of the clothing that I had with me viz : breathable t-shirt , Paramo Velez Adventure Light Smock, Paramo Pasco Jacket, boxer shorts, Berghaus trousers, Paramo Velez Adventure Over-Trousers, Hilly Twin skin socks, Hoka Speedgoat 2 shoes, two buffs, Montane Mountain Hat, liner gloves and ski gloves.

Eventually as darkness fell I got into my Bivy Bag as well; Terra Nova Moonlight and was careful to use my Montane 55 L rucksack to sit/lie on and insulate me from the ground. 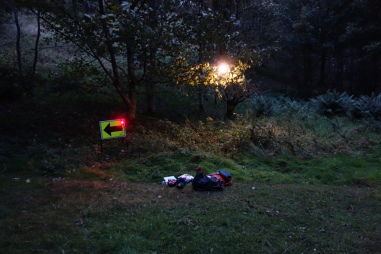 I had other equipment including a Bothy Bag but as usual if I had used the Bothy Bag I would not have been able to see, direct and encourage competitors at a point where they needed a friendly face. It was for emergency use only.

I also ate fairly constantly and nibbled away at high calorie food, giving my body something to work with, to help to produce heat.

Observations
With all of that I was comfortable but not overwarm and was quite happy to be stood-down at 1945 hrs to run off the hill.

Had I been in running gear it might have been a different situation entirely:

The two Paramo jackets separately would be warmer than most lightweight running jackets. I was wearing both.

Would a runner have had a warm insulating layer?

Would a runner have had any insulating leg-wear?

Would they have had an insulating hat or gloves?

Would they have had a Bivy Bag or much less effectively a foil blanket?

The weather was windy but dry and it would have been worse if wet and particularly if wet at the point when forced to stop.

The only reason a runner would stop in these circumstances would be if injured or exhausted and the injury, exhaustion, distress and shock could make all of the factors worse and mean that their emergency precautions could be totally inadequate.

In a race situation, unless off course, someone should hopefully trip over the injured runner and help but if running solo in the wilds, help could be a long time coming.

The Bivy Bag kept the wind off and kept me reasonably comfortable and would have been far better than a foil blanket. However, it was not perfect even with the additional items I had, which I wouldn’t have if running. I am now in the process of re-evaluating my whole strategy for a situation where I become immobilised, whether alone in training or as part of a race. This of course extends to companions or people I come across in the wilds.

I am going to research and look at alternative Bivy Bags, some of which have heat reflective properties, along with things like much more lightweight Bothy Bags that could be easily carried whilst running and any other easily carried items which could increase my comfort and ultimately my ability to survive. I do have an ace up my sleeve in that I already own and carry a very small and light Personal Locator Beacon (PLB) which would summon help at the press of a button but only in the direst of emergencies.

What are the chances of needing this or being so prepared? I don’t know but it only needs to happen once ………

When running in the wild I do carry the Bivy Bag but have sometimes left it behind in favour of a foil blanket at races. I also carry an insulating layer which tends to depend on the weather and could be a very lightweight down jacket or a synthetic fibre gilet or even just a long sleeved t-shirt. However, even with this I do think it could be very uncomfortable if forced to be immobile for any length of time.

Wearing running gear and being forced to stop and wait for help is not an attractive proposition. If someone had the appropriate kit they would be uncomfortable whilst waiting but would have a good chance of surviving. Without appropriate kit, disasters are waiting to happen. In a race, Mandatory Kit should be seen as the bare minimum and many competitors may wish to carry more. No rules apply when out training but again a carefully thought out strategy for what to carry and more importantly knowing how best to use it, could be very useful.

I’m on a journey and happy to share. Join me and add your thoughts

I'm retired and active in Ultra Running and many other outdoor activities. I do voluntary work with a Childrens' Hospice, Ultra Running Races and as a Disaster Aid Response Team member. I'm just me but some folk seem to find my stuff interesting for some bizzarre reason. View all posts by Matt Gemmell

2 thoughts on “Thoughts on being immobilised in the wilds.”